Wii and the Aesthetics of Alienation 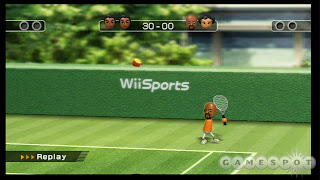 The inlaws got my family Wii for Christmas. Having lived with it for a couple of weeks it's much easier to understand its popularity. Much hay is made of how Wii and now Microsoft's Kinect are more physically active and (real world) social than other video games. This is undoubtably true, but I think that these are just corollaries to the real appeal. What Nintendo really got right is the artificiality and clunkiness (aesthetically not technically) of the interface. The Wii programmers went completely the opposite direction of most gaming trends which feature realistic graphics and "transparency" of the control interface. By focusing more and more on the verisimilitude of the graphics and the naturalism of characters' movements controlled by smaller more automatic and subtle hand movements on a gaming pad, Gamers games aspire for an ideal where the player is drawn into the alternative world on the screen as fully as possible. The ideal of games like Halo is immersion, for the interface and the real world to disappear as fully as possible. Anything that reminds the player of the artificiality of the actual situation-- their actual body, the computer or TV screen, the bedroom, office or den where they happen to playing--is treated (and rightfully so) as an impediment to the player's ability to unselfconsciously inhabit their avitar's body and the virtual world of the game.
By contrast everything, I mean everything, about the Wii is designed to create a friction between the simultaneous real and virtual experiences. The aim here is to create a graphical world with just enough verisimilitude to create a sensual, physiological pull, but which is also sufficiently artificial to create a counterbalancing push which never allows the player to unselfconsciously immerse themselves in the virtual experience. Take Wii Sports tennis as an example. The court, ball and surroundings are realistically modeled in terms of texture and mass. Trees even shudder in the virtual breeze. Light flows convincingly over objects casting correspondingly believable shadows. Engineers have coded sfumato, the atmospheric illusion of light scattering off of molecules of air, they have programmed lens flare and soft-focus depth of field. These are all very sophisticated perceptual clues that seem excessive especially when one remembers that the inhabitants of this virtual virtuosity are simplistic abstract figures who resemble nothing so much as lego people. Here stylization rather than verisimilitude is the rule to the point that any unnecessary and visually confusing elements-- even the characters' arms have been omitted. The upshot is that the space sucks us in, but the figures distance us perceptually from this world. The space is real but we aren't in it. It is inhabited by a symbol that stands in our place.
The result of this frission is the constant to-ing and fro-ing of perception that conflates actual experiences occurring in the room with the virtual experiences occurring on screen. Immersion wants us to confuse the virtual FOR the real as an alternative to reality. Wii is based on a balance of perceptual artificiality and sensual seduction that encourages the player to conflate the virtual WITH the real to crate a single unified experience which is a fusion of the real and the virtual, nether suffiiently real nor convincingly virtual to allow conscious perception to settle comfortably inside or outside the game. Psychologically speaking, playing Wii presents us with a classic case of dual consciousness or alienation. Marx, DuBois and Lacan never imagined that psychological tension, a schism in the geist could be so darn fun...
Posted by Michael Arrigo at 9:30 PM No comments: 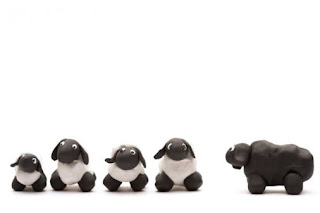 Two words: "mission creep". That was the first thing that went through my mind when I was recently asked to facilitate a working group at the next ITI Think Tank that is going to consider engaging student leadership in the classroom. Now mind you, these are freshman level art courses were talking about here, not business administration or political science classes. I have long been an advocate of expanding the foundations curriculum beyond the introduction of art and design principles, eagerly engaging progressive approaches to course content, classroom delivery and curricular structure. The last twenty years or so there has been a steady drum beat to expand the mission of these introductory art courses and I must add, most programs and students are much the better for it. But with the learning outcomes for these courses beginning to rival the optimistic inclusiveness of a six-year-old's christmas list, my first impulse was to wonder of all the things that we should and could be teaching, is leadership really where we ought to spending our time and resources?

Add to this this the fact that I continue to harbor a deep rooted wariness of leadership in general as a positive social value. One of the reasons I was attracted to the arts in the first place is it's romantic aura of revolution, art's history of challenging traditional notions of leadership-- the artist as individual free agent blithely aloof or actively eroding the consent of the governed to fall in line with social convention, political coercion or corporate co-option. Despite my best effort to shake off this admittedly romantic and historically shortsighted bias, "leadership", with its evocation of herd mentality, and connotations sheep and shepherds, still retains the faint aroma of the barnyard for me. So I seem a somewhat unlikely candidate to head up discussions about engaging student leadership in art foundations classroom.
However after a bit of reflection and research I have come to realize that it is the language of leadership, not its principles or implications for student learning that I find vaguely troubling. I discovered that my misgivings are largely based on traditional understandings of leadership, the "command style" of the singular leader with its attendant hierarchical power structures, narrow conception of individual achievement and cult of personality. Contemporary theories of effective leadership tend to eschew this model in favor of shared or distributive leadership and the "flattening" of organizational structures. The term "shared leadership" has an oxymoronic attraction that I find somewhat irresistible. The idea of shared leadership is on its surface as silly and comical as a Yogi Berra malapropism but its implications can run as deep as a Zen koan. There is something to be gained by re-imagining what we do as foundations art instructors using a student leadership framework and I look forward to getting schooled at Think Tank where maybe we'll find out just how many leaders one organization can stand...

Posted by Michael Arrigo at 10:48 PM No comments: