The Geography of Value

On a sunny, though mucky, early spring day, while walking on campus between classes, I was startled by something fairly minor, the unlikely proliferation of young women conspicuously wearing boots--most, tough not all, of the tall, fuzzy "Ugg"-like variety that are a fairly common sight at ski chalets and viking clan councels. Apparently, this recent run of hippy-warrior chic has also given rise to an interesting spin off, the preppy farmhand look, jeans tucked into mid-calf rubber waders that have been silk screened in tritiary color schemes and funkygiftwrap patterns. 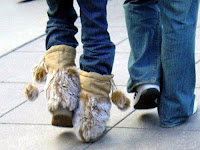 But my point here is not to be catty or smug-- boot mania is harmless and even fairly chaste when compared to many other recent trends that involve baring more and more tattooed, bottle-tanned, midwestern skin. Ultimately boot mania is neither more or less sensible than any other fashion or fad. I mention it only because the impact of seeing so many pairs in one place got me to thinking about aesthetics and boots-- about their relationship with the land and how aethetics are perhaps best understood as the landscape or geography of value.

When "aesthetics" is used as a synonym fashion or style, this might be thought of as a "weak" conception of the term. A "moderate" conception of aesthetics looks beyond individual expressions of value (fashion). "Ugh" boots are indicators or symptoms of underlying values and qualitative judgements. These values and methods of valuation are not individual, rather they are shared by members of a particular group, subculture or culture.
Paticular styles and fashions are expressions of values that can (and do) change readily, but the underlying aesthetic system that attaches positive value to things or persons who are stylish and fashionable is much more constant. I am arguing that aesthetics should not be understood in its conventional and narrow sense to refer to ideals of beauty but rather in a more fundamental sense to refer a group’s shared notions of precision, consistency, excellence, correctness, and completeness. Particular styles and fashions may be understood to be expressions of values and norms that a group associates with conceptions of beauty. These values and norms are themselves articulations of the underlying aesthetic system. The relative positions and arrangements of various cultural values and norms are free to change with time and tide, and even to cluster asynchronously into distinct subcultures, but not everything is possible, or even thinkable.

Aesthetics comprise the relatively stable (but by no means inert) field that sets limits to the types of relationships, the degree of mobility and range of movement that values might assume relative to each other. Viewed in this way, aesthetics may be understood as the topology or geography of value. Aesthetics constitute the “terrain” that exists between cultural sites. Examples of cultural sites include domains that we label "family", "work", "leisure", "politics", "the body", "youth", "science", etc. The aesthetic "landscape" will encourage or inhibit certain value constructions at specific sites. It will also have important consequences for a given site’s stability, and be an important determinant in the ways in which values can circulate between sites. Aesthetics are intimately tied to a group’s ontology-- its collective, and largely unconscious, understanding of what there is, how things work, what is valuable and what is possible. An Individual’s belief system is fundamental in formulating and negotiating notions of self and world. This belief system is forged in the crucible of group aesthetics.
Posted by Michael Arrigo at 10:40 PM No comments:

Labels: aesthetics, art, boots, fashion
Mind of course exists in time, but its exitance as a space is much more problematic. There is no actual space to be "in" such as when we say "I'll keep that in mind" or "You're in my thoughts." Thinking isa process or an activityConsciousness is an event, If ,as part of the ongoing e, it turns back on itself, this turning or generates a "space". This turning back on itself is commonly reffered to as self- cousness, awareness, memory, or thought (thought here referring to the activity of "thinking about" as oppsed to "thinking as" or simply percieving/responding .)
Posted by Michael Arrigo at 7:56 AM No comments:

Life as a Sponge

So you want to be moved?
Then wring out your expectations.
And bring only a dry carcass
Thirsty for experience.
Posted by Michael Arrigo at 6:29 AM No comments: